Second Round of LTRO and Volatility Connectedness

The European Central Bank completed the second round of its long-term refinancing operation (LTRO) at the end of February. In the second round the ECB lent another €500 billion to Eurozone banks, increasing total funds used by European banks to €1 trillion.
The second round of LTRO had its impact on financial markets.  With the expectation of the second round, the market sentiment improved significantly in February. As a result, the total volatility connectedness across 14 major European banks declined. On February 14, two weeks before the second round of LTRO was completed, the index hit the lowest level in more than two year, 71.8%. The index fluctuated between 72% and 73% for three more weeks, including the week of March 5-9.
Certainly, the decline from close to 90% all the way down to slightly above 70% shows that the ECB has been following the right policy mix by providing unlimited liquidity to European banks.  However, it is important to note that much of the gains, measured by the decline in connectedness index, accrued in the first round. In the first round, the index declined by 9.4 percentage points, from 84.9% on December 1, 2011 to 75.5% on December 30, 2011. Compared to the first round the impact of the second was rather limited.  In the second round, the decline in the index was not more than 3.5 percentage points.
This comparison definitely shows the limits of the effectiveness of liquidity operations such as LTRO. Furthermore, the behavior of the index over the week of March 12-16 is a more serious warning to those who thinks that things will be smoother in the near future.  The index lost much of the ground it gained in the week of March 12-16, reaching 75% as of March 16.
The Eurozone debt crisis is not part of the history, yet.   Banks still carry huge sums of sovereign debt as part of their assets.  The ECB’s LTRO has provided a breathing space for the Eurozone economy.   Unless the EU leaders agree on a permanent solution this spring, the next episode of the Eurozone debt crisis is likely to take place in 2012.
Posted by Kamil Yilmaz at 2:18 AM 1 comment:

In my voxeu.org article (Major European bank stocks are connected in a state of high volatility) in September, I summarized my recent research on a eurozone banking volatility connectedness index. The analysis covered 14 leading banks in six eurozone countries (Belgium, France, Germany, Italy, Netherlands and Spain) and Switzerland.

The index was developed following the methodology my-coauthor Frank Diebold and I proposed in our Economic Journal paper in 2009 and further developed in our recent NBER working paper on major American banks.  The index is intended to be a measure of how volatility shocks to bank share prices are spread to others. Here I will summarize and comment on the recent readings of the index. The total connectedness index is reproduced below.  The index and the directional connectedness indices for each of the banks included in the analysis can be viewed at www.financialconnectedness.org. 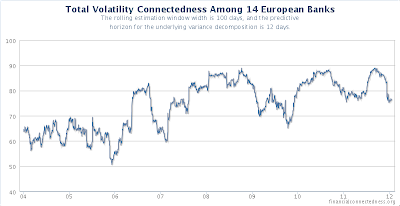 The total volatility–connectedness index started out at 64% as of January 2004 and never declined below the 50% that was attained in December 2005. After a relatively tranquil period in 2004 and 2005 the index fluctuated widely over time. The Federal Reserve's May 2006 decision to increase the Fed Funds target rate by another 25 basis points triggered an increase in volatility across many asset classes. Then, in March 2007 the first signs of the subprime crisis appeared, followed by the liquidity crisis of August 2007, the Black Monday in world stock markets on 21 January 2008, and the collapse of Lehman Brothers on 15 September 2008.

When the total connectedness index declined in late 2010 and early 2011, it did not fall below 75%. The new plateau of 75% that was settled after the markets had become more tranquil, however, was not very assuring, especially when one compared it with the low point of 65% that was reached after the global financial crisis in the second half of 2009. Once the worries about the Spanish and Italian debt started to put increasing pressure on the bank stocks from late June onwards, the index started to increase again, reaching its highest level at 89% on September 7.

After reaching 89% in early September, the volatility connectedness stayed around 88% until the end of September 2011.  Then, it fluctuated between 85 and 87% throughout October 2011. After closing the month of November at 84.7%, the index went down to only 83.5% as of December 13.  That was the day the ECB made a total of €498 billion credit facility available to Eurozone banks for a three-year term. In three days, by December 16 the connectedness index dropped to 77.4%.  The connectedness index dropped further to 75.2% by December 29, 2001, and fluctuated around 75% until January 20, 2012.

The ECB’s decision to provide ample liquidity to eurozone banks at 1% for a three-year period led to an immediate decline in total volatility connectedness index. Therefore, the index reflected the impact of the policy on eurozone bank stocks very quickly, at least one month before the sentiments in major financial centers turned around in mid-January. In that regard, the index can be viewed as a tool that gauge the impact of major developments on the eurozone banking system as a whole.

I will finish this piece with a note of caution.  The level that is attained as of the end of 2011 is still higher than what it used to be before the era of financial crises.  Furthermore, the downward trend in the index stopped as of the first week of 2012 and can easily be reversed if it is not followed by serious actions on the fiscal front.  The EU leaders need to act to strengthen the EFSF’s firepower so that it can be used to prevent Italy and Spain from becoming the latest victims of the sovereign debt crisis.
Posted by Kamil Yilmaz at 1:12 AM No comments: